I really wanted to make a fancy gourmet type of appetizer for Christmas this year – one that looks like it was invented in the fifties and looks questionable but tastes pretty amazing – and I think I did it!

We always used to have simple mini toasts with some sort of meaty spread on them as an appetizer when I was a kid, and I used to love them but there isn’t really all that much cooking involved. I also really liked those fancy little oven mini tarts and quiches so I wanted to try make a vegan version.

I absolutely love porchini mushrooms but they’re impossible to find fresh, so I had to use the dried ones but they’re fine for this dish since we’re blending it anyway. I absolutely love the combination of mushrooms with walnuts – but you really take it to the next level if you try these appetizers with a little bit of Gaz Oakley’s cranberry sauce on top of them. Umami, nutty, sweet and sour – it’s really delicious. I made my own crust from scratch, but I think you can use a store bought pastry crust (you might have to alter the baking time though, check the package). 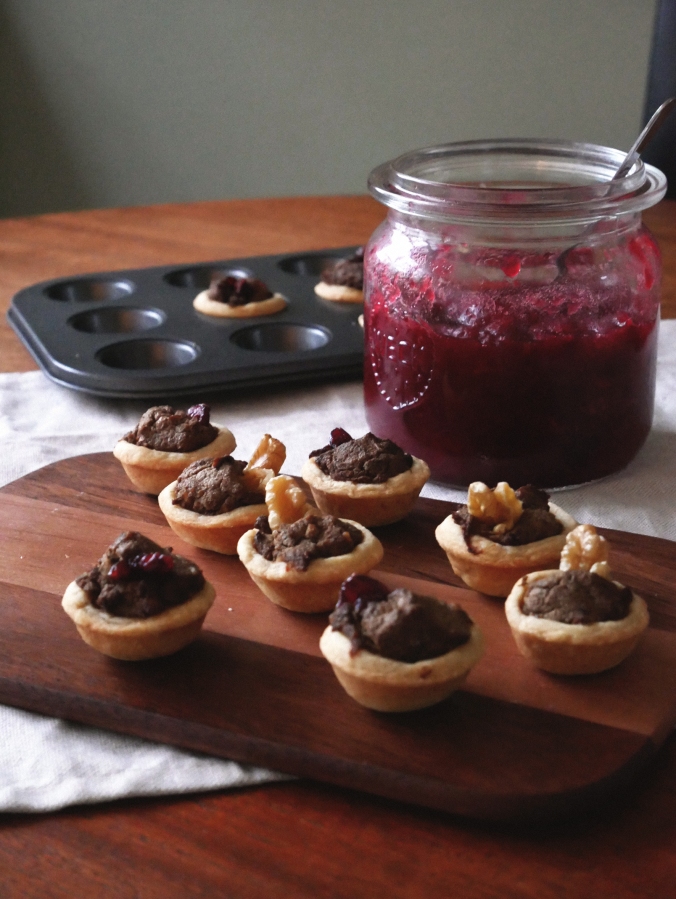 1. First make the pastry dough. Add the flour and sugar to a bowl and mix. Then add the butter in little chunks and work the butter into the dough with your hands. Add the water one tablespoon at a time and press it into the dough until it starts to come together. Once you can form a solid ball of dough, wrap it in cling film and refridgerate it for about an hour.
2. To make the filling, first rehydrate the porchini mushrooms by adding them to a cup of boiling water. Also preheat your oven to 180° C.
3. Slice the mushrooms and mince the garlic. Put a bit of oil in a pan and put it on medium heat. Add the mushrooms and garlic and cook until the mushrooms are done.
4. Scoop the hydrated porchini out of the water and add them to the pan, cook for another minute or two.
5. Crumble the tofu in a big bowl and add the mushroom mixture, walnuts, liquid smoke and soy sauce. Blend until you get a slighty chunky texture and taste. Add salt and pepper if you want to, or more liquid smoke and soy sauce.
6. Roll out your dough, make sure it’s about 3 mm thick. I always roll out this pastry dough between two sheets of parchment paper to prevent the flaky dough from sticking to the rolling pint or countertop. Once it’s rolled, cut out circles big enough to fit the muffin tin, but not so big you have to much crust hanging over the tin. Press them into the little muffin shapes in the tin.
7. Now fill the pastry cups you just created. I use a generous teaspoon, but you can use a little less than me because these are intended to eat in one bite and I went a biiit overboard on the filling.
8. Bake them at 180°C for 20-25 minutes until the crust and filling is browned. I added some extra walnuts or a dried cranberry on top after baking, but that’s optional. I love having these with Gaz Oakley’s cranberry sauce, watch this video if you want to make some yourself!

Hi, I’m Michelle and this is Omber – a food blog where I share my favorite plantbased recipes and talk all things vegan kitchen! More about me here.